WordPop! for Android has been updated and includes great new features and smoother game play. Thank you to our players for the suggestions and bug reports. Our goal is for you to have the best gaming experience and we couldn’t do it without you.

Making sure you have a great gaming experience also means having WordPop! play well on the latest phones and tablets while simultaneously supporting older phones.

We recommend you update as soon as possible.

We rely on word-of-mouth, please let your friends and family know about WordPop! 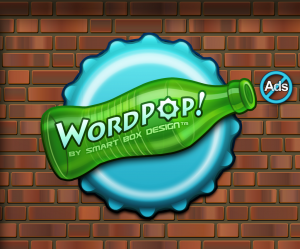 You Can Now Remove ads in WordPop!

– Deselect highlighted letters by tapping outside the grid
– Remove ads with an in-app purchase
– Incremental improvements and fixes to the code making sure WordPop! is the world’s best word game ever.

Lots of sweat and love added to bring you the best experience ever.

Send your suggestions to support@smartboxgames.com

Last week, on May 13, we submitted an update to WordPop! iPad to Apple. We were excited about this new release because it supported landscape. Players would be able to enjoy WordPop! Volt on the iPad in all orientations. I personally really enjoy playing in landscape mode a bit more than portrait as I find holding the iPad horizontally easier.

After a week, we heard back from Apple, the update was REJECTED. To quote Apple, “The iPad Human Interface Guidelines state that only one popover element should be visible onscreen at a time. On launch, and when the user taps the “Add Player” button, and additional popover is displayed for the user to enter a player name. Screen shots are attached for your reference.”

My team and I are aware of the one popover limit but the second popover is a dialog which I did not consider in the same class as a popover. Additionally, Apple had approved the two previous submissions of WordPop! Volt which has “Add Player” working exactly the same way.

Apple has been very good to us in that they usually provide a screen shot and description of what is wrong. 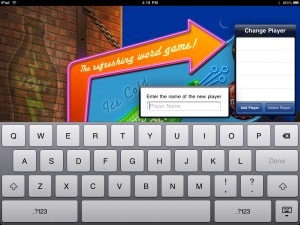 The fix is straight forward, we need to remove the first popover “Change Player” when “Add Player” is selected. This should be done any second now and we will resubmit.

Lesson learned, it does not matter what Apple calls the widget being used in the iPad User Interface Guidelines, only one “popover” at any given time.

Update: May 24, 2010 – We resubmitted WordPop! Volt. Below is a screen shot on the change. This new look conforms to the iPad UI guidelines. 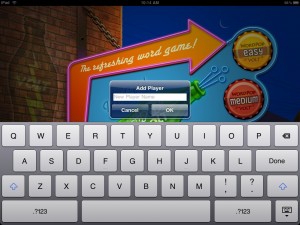 Jim’s recent hand-off of the title screen for landscape orientation. To be released in a few weeks as a free upgrade for all.