Let me first apologize for the lack of screenshots this time around. None of my recent work shows in a static image, so there wasn’t much point. However, that is not to say that things were not done!

Much of the polish and shining has been accomplished in the last couple of days. WordPop will successfully find a previous installation of the game and import all of the settings and game information. So, your best words, high scores, volume settings, and even your game in progress will be imported so you can continue with the new application right where you left off with the old.

I also added the popping animation to the start screen. How many of you know that you can tap on that animation to play it again? That cute feature made the transition as well.

Next, I added something you can’t see at all, but you’ll know if it is missing: sound effects. All of the same sound effects used in the current WordPop are back again and they sound great.

To top it off, I also packaged the first beta release build into a CAB. That process has forced me to set up the mini-infrastructure necessary to build CABs and installers. Not a difficult task, but it does involve the wrangling of .ini files, batch files, and a variety of folders with specific names. It also involves two computers, but there’s an odd historical reason for that. All that to say that the production of a single CAB actually involved many moving parts that, I’m glad to say, seem to be working well.

So, Todd has his first review build and we’ll be continuing the polishing as he gets to examine the new beast. I’ll be back to tell you more as it gets added, but it’s sure getting close now!

So, I’ve finished one little thing and one kinda big thing since we last talked. The little thing is that WordPop will remember the last name you used for a high score and present it again the next time you make the big board. Just a nice touch, nothing too difficult.

And, actually, the big thing wasn’t too hard, either. That’s because most of the work was in creating new artwork and Jim did a great job doing that! So, here are some screenshots of the new resolution we’ve added to WordPop, suitable for your Treo 700 and other 240 x 240 devices. 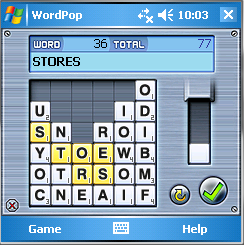 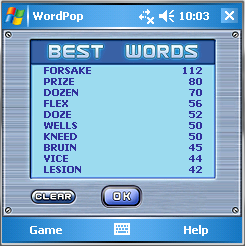 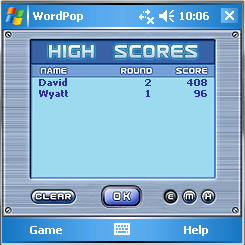 You’ll notice that the buttons have been rearranged on game board and that the dialogs needed to squeeze the font down to fit. Let us know what you think of the look at this resolution.

All that’s left now is some final polishing and bug fixing. Then, I’m on to the most mundane part of software development: installers. Bleh.