I loved all the great feedback at the forum. My favorite quote was from, Marie, who said “This game, like all the Smart Box games, is great! My house may never be clean again.”

Congratulations to all the winners from the February 5 Word Monaco Solitaire Contest.

Solitaire Central is a niche web site that concentrates on solitaire games of all types. I noticed this review they recently posted. Please visit their site to see all the interesting solitaire games they have. However, my game, Word Monaco, is a must see. 🙂 Here is their review. 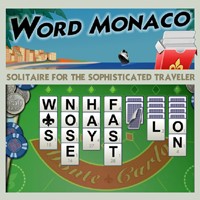 Word Monaco is a unique blend of a word game and a card game, where the playing cards contain letters rather than numbers and royalty, and your goal is to spell words rather than to build according to suit or value.

At the beginning of each round, the cards are layed out as in Klondike solitaire. You must use as many cards as possible to spell as many words as possible within the tableau (there are no foundations). Each letter card is worth a certain number of points, based on how often it is used in common words (this is similar to the way that Scrabble and many other word games work). Words are spelled within individual tableau piles, and letters or words may be moved between piles to build new words, or to add on to or modify existing words. You can score bonus points by building long words, using all the letters, or using various power-ups that you earn during play.

It’s an interesting concept, and it works reasonably well. There’s no time limit, so the game is really more of a puzzle than an arcade game (which is not a bad thing). As in most word games, success does depend a good deal on your ability to spell, and to recognize combinations of letters that form the building blocks for words. With a word list of over 50,000+ words, the game does recognize a great many possible words.

The game uses only the one layout, as far as I can tell. With so many layouts available in solitaire, I don’t know why the developers limited themselves to just one. But that’s a minor complaint. The bottom line is this is a fun game. It’s certainly not your everyday solitaire game, but if you enjoy word games, I think you’ll find this to be a fun way to spend your time and exercise your mind.

The Pocket PC version of Word Monaco has arrived to take you away. It’s our new and unique twist on the game of Solitaire by using letters instead of numbers. Whether you have a PC, Palm, Treo 650/680/700/750, or any other Windows Mobile device, we have the game for you.

In referring to word games, Allen Gall of Pocket PC Magazine says, “Word Monaco Solitaire is the most interesting title in this category that I’ve seen…”

With nine difficulty levels, settle in for whatever type of challenge you’re in the mood for. Mac users… stay tuned!

I listen to NPR on a regular basis, especially when I am making the drive from Bellingham, WA to Seattle, WA. Every few months NPR will have a fundraiser (OK, not ever few months but it sure feels like it). This year the local station in the Pacific Northwest is having an online fundraiser. I see this as a great opportunity to give back to NPR so I have donated all five games that Smart Box Design has developed. They are WordPop, Word Monaco Solitaire, Word Watch, Triples, and Farkle Dice. Bidding on the games is from February 16 – 22, 2007. You can go here to get involved and donate or make a bid.

I am getting a bit weary of reviewing word games (I love them, but there’s just not that many new things you can do with them at this point), but Word Monaco Solitaire is the most interesting title in this category that I’ve seen all year. The game is based on the idea of playing a word game based on solitaire at some sort of resort in Monaco (I could probably find better things to do in Monaco than play card games, but that’s the basic idea and it does give the game a nice atmosphere).

Here’s how it works: The game pieces consist of letters that are arranged in columns just like they are in solitaire, and the idea is to move them around until every letter forms a word. That’s the essence of the game, although three rule variations are offered along with nine difficulty levels.
The basic concept works well enough. Even though the number of words in each level is limited, getting all the letters into just the right spot provides a good challenge. Had the game been thrown together with limited sound and mediocre graphics, it would likely be overlooked as just another shoddy word game. What makes WM an exceptional title are not only the terrific graphics, music, but the overall feel of the game. While the graphics and sound evoke the famous French resort country and contributes to the game’s atmosphere as a casual game, WM provides plenty of feedback to the player. Once you successfully create a word, a green gem appears over that column. Dragging over a letter or group of letters results in a pleasant sound effect as well as the last “card” in the column to smoothly flip over.
Word Monaco Solitaire is not quite the same as taking a vacation, but its design and implementation meet all the requirements of a great casual game. Its visually stimulating, has great audio, has challenging but laid back game play, is very engaging, and is very easy to play. While it relies more on eye and ear candy more than other word games, it’s still good fun.
Title: