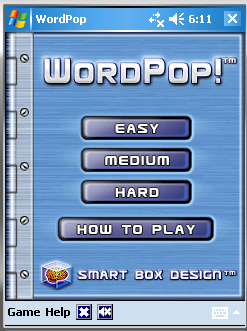 I’ve finally laid the groundwork for the WordPop update. I’ve built the skeleton on top of our proprietary framework. The original WordPop for PocketPC was based on an attempt we made to share a framework between the Palm and PPC versions which was a moderate success. In the end, though, we felt we’d get better performance with separate frameworks and I wrote a new one for Farkle which also got used on Word Monaco. WordPop now gets to join the club.

I’ve been working on the prefs structure lately. The prefs for the original were done in a non-standard way for PPC devices and were susceptible to loss in certain reset situations. Since Farkle, I’ve been better about it and it’s time to fix WordPop. I will also have to write some code to read the old prefs and maintain the Best Words and High Scores after an update. I always feel like I’m corrupting clean code by including poorly written code just to support older versions (even when I’m the author of the ugly stuff, too!). But, even I would be annoyed if I lost the records of my best games, so it’s going in.

Next up, placeholders for all of the different screens in WordPop.

Allow me to introduce myself. I’m Wyatt Webb and I am responsible for the engineering on the Windows Mobile versions of WordPop, Farkle, and Word Monaco. Todd mentioned that an update to WordPop is under way and I thought I should chime in a bit.

WordPop was our first Windows Mobile game and, as such, it is a little rough around the edges internally. I had a much better idea on how to tackle these types of games when we did Farkle and Word Monaco. So, not only will this next version of WordPop include new features and more fun, but it will be significantly remodeled on the inside, too.

That probably doesn’t mean much to the average user, but it will mean that future upgrades and maintenance will be quicker and easier.

I’m just getting started and I don’t even know all of the new features, yet. I’m looking forward to building them as much as I hope you all are to playing them. I hope to check in periodically to update you on my progress and the twists and turns of casual game development.