Hey there, back again with a quick update. I’ve just finished another new mini-feature for WordPop. Previously, when placing bonus tiles, the only method was to click the bonus tile and then click a location on the board for it to be dropped. Now, for an ever-so-slightly more interactive method, you may click and drag a bonus tile to wherever you want to place it. If you drop it somewhere illegal (over another tile, or off the board), then it’ll simply snap back. It’s not very exciting, but here’s a picture of a drag in progress: 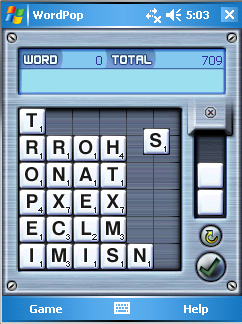 I’m off to touch up a few other things and then I’ll be adding the 240 x 240 resolution art. That’ll produce some fun screenshots. Talk to you again, soon!

WordPop marches on. Over the last couple of weeks, I’ve been cleaning up some bugs in the Best Words and High Scores dialogs that had lingered on. I’ve also added another new feature of WordPop: tips! 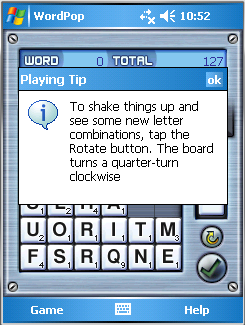 Tips are something we started in Farkle and have been a popular way for players to learn the game as they play. As before, you can disable the tips in the preferences. The tips are really there to get the player started and to remind them of helpful features that can be forgotten like Rotate, Undo, and the bonus tiles.

There are a few more bugs on the horizon and the 240 x 240 resolution version coming up next. Jim, our fantastic artist, has already produced the images I need for that layout, so it’ll just be matter of making the game engine conform to that size. Again, this is not new for us, as we did this for Farkle and Word Monaco. 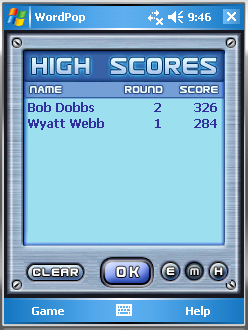 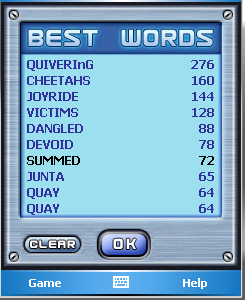